Global warming is an alarming issue within humanity today and is worsening every day. Many of us argue that there isn’t enough awareness spread about its consequences by the media, leaving its danger concealed. Scientists warn that if this generation fails to find an escape or improve the situation, it will have a detrimental impact on future generations. 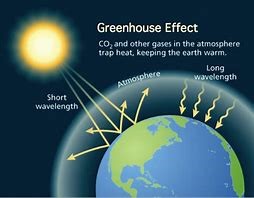 The greenhouse effect is the idea that when the sun radiates electromagnetic radiation towards the Earth, the Earth will absorb it as humanity need’s warmth in order to survive. However, as the Earth absorbs that radiation it radiates infrared radiation off of the Earth’s surface. As Greenhouse gases such as Carbon Dioxide and Methane build up in the atmosphere some of that IR radiation will be absorbed and re-emitted in all directions including back to Earth, instead of it being emitted into space, causing the Earth to warm up even more and leads towards global warming.